A SHORT HISTORY OF THRUXTON

A community of people has dwelt in the parish of Thruxton for at least a thousand years.  The settlement was called Anne at the time of the Domesday survey but it became known as Turkilleston by the 12th Century.  The name was shortened to Throxton and Truxton in the 18th Century and eventually to Thruxton some time in the 19th Century.

At Mullenspond, an impressive Roman building had been constructed.  There is something of a mystery about this building for, although it is referred to as a villa, it was possibly a temple dedicated to Bacchus who is depicted on the mosaic pavement which was found under the rubble in 1823.  The mosaic was taken up and presented to the British Museum where it still adorns a prominent wall in the Romano British Room.

The original Thruxton Manor was one of the large fortified types, of which there were only three in Hampshire.  During the Second World War, the Manor was acquired for use by the Ministry of Defence but has now been returned to private ownership.

Many of the treasures of Thruxton Church are in the form of tombs and effigies of the Lords and Ladies of the Manor.  The Church also has seven beautiful stained glass windows by Thomas Willement who was granted a Royal warrant by Queen Victoria

Little was done by parishes to maintain the roads, so Parliament allowed turnpikes and tollgates on the busy roads to help pay for their upkeep.  In 1761 the Amesbury Turnpike Trust set up a turnpike road between Andover and Amesbury with a gate at Mullenspond, opposite the White Horse Inn

Poverty in our villages had become an enormous problem and in order to alleviate the burden on the parish, workhouses were set up in 1834.  Thruxton became part of the Andover Union and in 1837 all was set in Andover to remove the curse of pauperism.  On 25 March the doors of the workhouse were opened to admit one hundred and eleven paupers.  It is evident that the poor of our village were thus doomed, for in December 1843, we find the first reference in the church burial register to a parishioner who died in the Andover workhouse.  Over the period of some fifty years, seventeen others who were buried at Thruxton had died at the workhouse.

In 1874 the parish established a school for 93 scholars in what is now the Old School House and enlarged it in 1894.  Each day at school the boys would have to go and draw water from the pump room in the rectory   The children took their own lunches but on very cold days soup was served to them.  Today a modern school, built at the apex of the three villages, serves Thruxton, Fyfield and Kimpton.

David Lansley was the village blacksmith at the Old Forge and when he retired, his son Ernest took over the business and ran it from Forge Cottage, next to Robin's Roost.  Horses were shod here, wooden wheels were bound and other repair work was undertaken.  The village carpenter had his workshop at Veronica Cottage where, amongst other things, he made coffins.  The Bray family ran the bakers in Thruxton up until 1969 and the shop itself sold everything.  In the early days, goods for the store came by horse and cart from Andover and Salisbury and the flour for the baking from Stockbridge.  The Post Office, sited in various houses over a period of time, remained in the village until it moved to Weyhill in 2008.

The village carrier lived at Flint House (now Hazelhurst House), where he kept his horse and wagonette.  He visited Andover on Mondays, Wednesdays, Fridays and Saturdays, and Salisbury on Tuesdays.  He would leave Thruxton at about 10.00am with shopping orders and would return to the village around 7.00pm with the goods that always included some casks of beer for the farm-workers.  At haymaking and harvest times, the amount of beer casks carried would increase considerably !!

The people living in Thruxton had little need to go out of the village themselves; the community was quite self-contained.  Doctors were as close by as East Cholderton and Weyhill, the butcher's shop was at Clovelly and milk was delivered from a churn on the cart pulled by horse from the farm at Mullenspond kept by the landlord of the White Horse.  Later it was distributed in bottles until, in the 1930's, the Milk Marketing Board took over the distribution.  There was a cobbler's shop at Bridge Cottage and it was here that Mr Scrivens would sell pots and pans and all manner of essentials from his barn.

Alas, there are now very few tradesmen frequenting the village.  True, we have a daily milk and paper deliveries and frozen food is available when preordered.  Yes, the postman continues to make his daily rounds, but between Saturday midday and Monday morning there are no mail collections from our postboxes.

In 1951 the WI compiled a superb history book of the village with newspaper cuttings, photographs and villagers' memories.  The book is an interesting and valuable record of village activities and personalities.  Coronation celebrations, the beginning of the new housing developments, etc

One extract in particular helps to cast light on earlier times. This tells how the parish was the scene of a notorious murder.  One April evening in 1920 a Salisbury taxi driver was hailed at Amesbury to take the passenger to Andover.  As he was driving up the hill to Thruxton Down he was shot in the back, being killed outright.  His body was found by a labourer next morning behind a thick hedge.  There was a hue and cry throughout the country.  Some weeks later the murderer was found in Banffshire where he shot and injured two apprehending policemen and escaped.  He was later found on the Carlisle to Edinburgh road where he was shot dead.  The murdered taxi driver was named Topliss and hence the hill at Thruxton Down became known as Topliss Hill.

The Village Green, once a field belonging to the Rectory was bought by the village in 1978 when our own rector was amalgamated into a seven-parish Benefice and the Rectory sold privately.  Now under the aegis of the Parish Council it is a wonderful village amenity on which we hold our annual Fete.  Just outside the entrance is our old Red Phonebox, bought for £1 when it was made  redundant by BT, and converted into a village library.  The problem here is that for every book borrowed, two seem to be returned !!

Our Village Hall, a Memorial to the dead of two World Wars, was built as a Methodist Chapel in 1817 and extended by the Victorians to include a schoolroom in 1870.  In 2004, the Hall underwent a complete refurbishment with money from the National Lottery Heritage Fund - this refurbishment has played a major part in bringing the community together.

The adjacent airfield was requisitioned by the RAF in 1940 and opened in 1941 as a satellite airfield for RAF Andover.  It was bombed during construction and 225 Squadron was the first to occupy it with Lysanders.  When returned to private use it has been the home of General Aviation, a Flying School, a Glider School and a Parachute school.  In 2008 Hampshire Air Ambulance was formed and its yellow helicopters are a familiar feature in the air round the village.

The motor racing circuit was opened in 1950 and completely refurbished to BARC standards leading to the first race meeting in 1968.  Today it hosts 12 major racing events including both Motorcycles and Trucks. 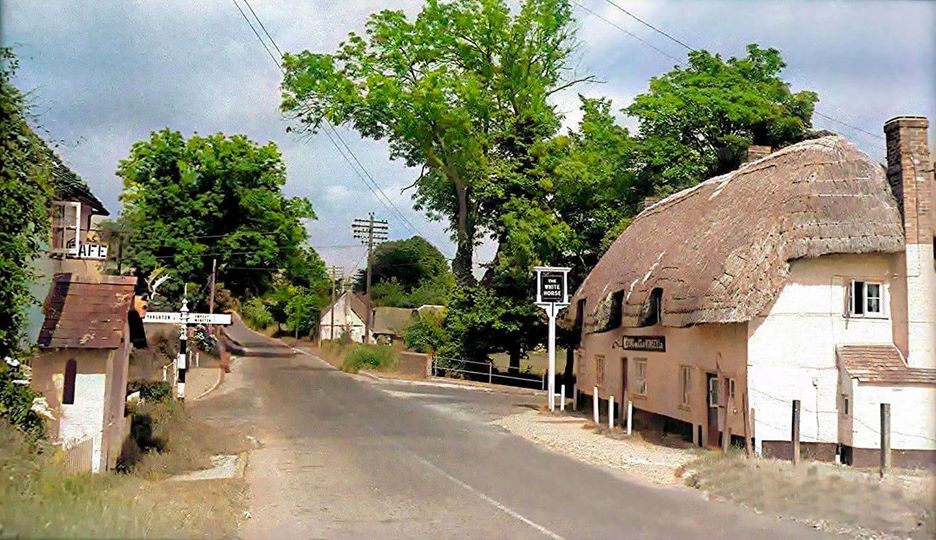